HAMBURG Hochbahn (HH) has issued a call for tender for the supply between 120 and 200 metro cars of two types for operation on the new Line U5 and the existing lines U1-U4. 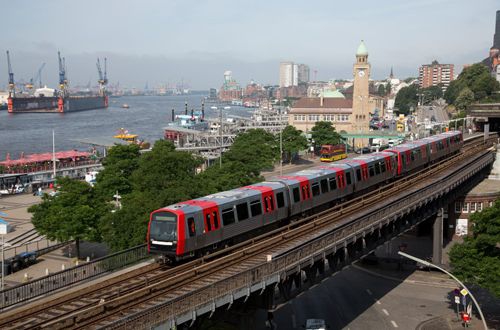 Type A cars will be approved for driverless operation (GoA4) with moving-block signalling for the new Line U5 line, which will connect City-Nord with Bramfeld. However, the cars also need to be equipped for operation on the conventional network which has fixed-block lineside signalling with driver-controlled operation (GoA1) in order for the trains to reach the depot. HS plans to procure between 50 and 90 Type A cars.

Type F cars will be based on Type A cars, but they will only operate of the conventional driver-operated (GoA1) network. However, the cars must be prepared for later, driver-assisted, computer-controlled, semi-automatic driving (GoA2) or driverless operation (GoA4). HH plans to procure 70-110 Type F cars with an option for up to 200 vehicles.

The cars will be about 40m long and designed to operate as two or three-car trains. They will have air-conditioned cabs, a floor height of 1030mm, and a maximum speed of at least 80km/h. The 1432mm-gauge network is electrified at 750V dc third rail, and has a minimum curve radius of 60m and a maximum gradient of 5%.