PRODUCTION of the next-generation double-deck EMU for Trenitalia was officially launched at Hitachi Rail Italy’s (HRI) Pistoia plant on January 20 with the unveiling of a full-size mock-up of the driving vehicle cab end. 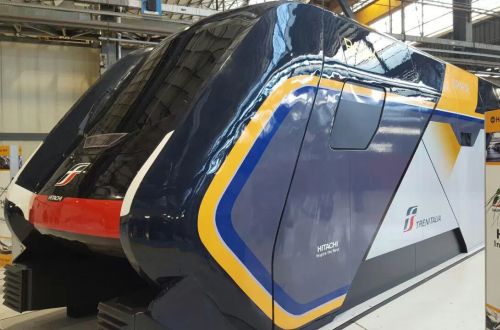 Trenitalia awarded HRI a framework contract last August to supply up to 300 Caravaggio regional EMUs with a maximum value of €2.6bn. The initial firm order is worth €333m and comprises 25 five-car and 14 four-car trains.

The 136m-long 2.8m-wide five-car variant will accommodate up to 656 passengers, with four motor bogies providing acceleration of 1m/s2. The 160km/h trains have been dubbed ‘Rock’ by Trenitalia, continuing a musical theme which began with the ‘Jazz’ EMUs currently being supplied by Alstom.
Production will be carried out at HRI plants in Pistoia, Naples, and Reggio Calabria and deliveries will commence in the third quarter of 2019.