THE last of 706 Vivalto double-deck coaches being built for Trenitalia under a framework contract awarded in 2010 to the former AnsaldoBreda left the Hitachi Rail Italy factory in Reggio Calabria on July 11. 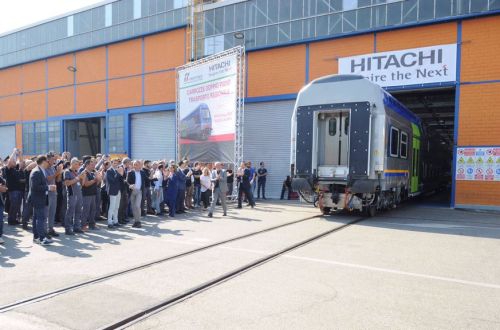 Trenitalia has invested €987m in the new fleet which started with an initial order for 350 cars, followed by the exercising of three further options in November 2013, March 2015, and November 2015.

Each of the six-car trains comprises five intermediate trailers and one driving coach with seats for 725 passengers and a total capacity of 1300. The 160km/h trains are designed for ease of access by disabled passengers, have the latest generation fire-fighting system, and real-time passenger information displays. The coaches are generally powered by E464 electric locomotives built by Bombardier.

Looking to the future, Trenitalia’s CEO Mrs Barbara Morgante said: “We are giving a determined acceleration to the tender for the 135 diesel trains launched a few weeks ago, and with the framework agreement for the supply of 450 trains, 300 of them will be delivered by Hitachi Rail Italy starting from 2019.”

Trenitalia signed framework contracts with Alstom and Hitachi Rail Italy in August 2016 for up to 450 regional trains. Alstom was awarded Lot 1 worth up to €900m for up to 150 single-deck EMUs. The deal includes a €240m initial order for 47 trains for delivery from early 2019 onwards.

Under Lot 2, Hitachi will supply up to 300 Caravaggio double-deck EMUs with a maximum value of €2.6bn. The initial order is for 25 five-car and 14 four-car trains worth €333m.

For more information on the global rolling stock market, subscribe to IRJ Pro.