THE first two-car metro train being supplied by Hitachi Rail Italy for Miami MetroRail has left the new Medley Plant in Florida after completing tests. 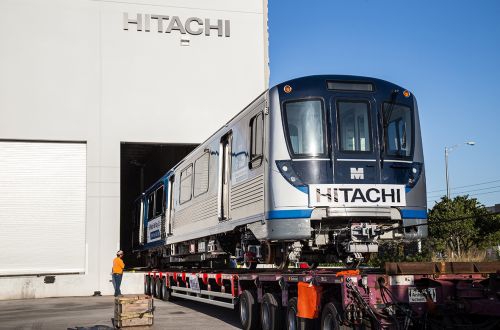 The tests verified the quality of assembly and operation of subsystems. Heating, ventilation, air-conditioning, brakes, doors, lighting systems and the propulsion system were all verified.

A second dynamic testing phase will begin after the first phase of operators’ training is completed, and the train will run on the MetroRail network during the night and at weekends.

The second and third trains will be delivered to MetroRail’s Lehman Center depot at the end of June and July respectively to complete the dynamic testing.

Hitachi will deliver a total of 136 metro cars to MetroRail in a contract worth $US 313m, which was awarded in November 2012.

The first metro car was unveiled last October, and the first train is expected to enter service later this year, with production finishing in 2019.