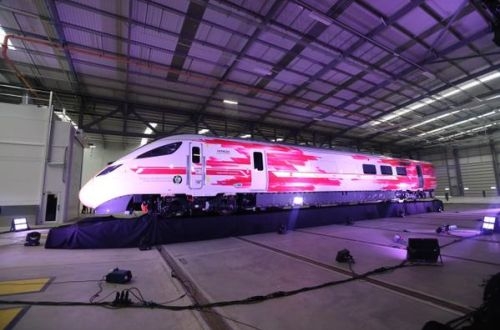 The factory will manufacture the new Intercity Express Programme (IEP) trains for the East Coast Main Line and Great Western Mainline as well as AT200 commuter trains for Scotland. The opening ceremony at the site also included the official unveiling of the first fully fitted-out IEP train to arrive in Britain from Hitachi's Kasado plant in Japan.

The opening of the new plant is being heralded as a major boost for Britain's manufacturing sector and jobs in the local area. "This massive investment from Hitachi shows confidence in the strength of Britain's growing economy," Cameron says.

Mr Hiroaki Nakanishi, Hitachi chairman and CEO, described the new factory as a world class facility which combines "the best of Japanese technology with the best of British manufacturing."

"It is our culture as a business to take a long-term view of everything we do," Nakanishi says. "From our investment here in Newton Aycliffe, to our network of new train maintenance centres across Britain, to our ongoing work in building a strong regional supply chain – Hitachi is here to stay."

• Hull Trains also confirmed on September 3 that it has placed a £68m order with Hitachi for five new bi-mode trains to replace its existing fleet of class 180 diesel trains which operate its services from Hull to London.

The order is dependent on Hull Trains securing a new 10-year track access agreement and managing director Mr Will Dunnett says the consultation process began in August with an application to Network Rail. Its current access agreement is due to expire in 2019.

"It was always our intention to make this application in late summer, but with uncertainty around the government's plans for electrification of the TransPennine route, we have made this decision on the back of the purchase of the new bi-mode trains."

The five-car trains are expected to enter service in 2020 and will operate at up to 225km/h compared with 200km/h by the existing class 180 fleet. They will boost capacity by 50% with 320 seats available in each train. "The bi-mode units deliver the benefits of electrification now," Dunnett says. "They also ensure we can continue to serve stations like Beverley after electrification of the Hull to Selby line is completed."

It has not yet been confirmed whether these trains will be manufactured at Newton Aycliffe, or Japan, as is the case for the bi-mode trains ordered in July for First Great Western services from London to Penzance.