HITACHI Rail Italy invited representatives of the media, Great Western Railway (GWR) and leasing company Eversholt Rail to its Pistoia plant on May 23 to view progress with the new fleet of class 802 inter-city trains for services from London to Devon and Cornwall. 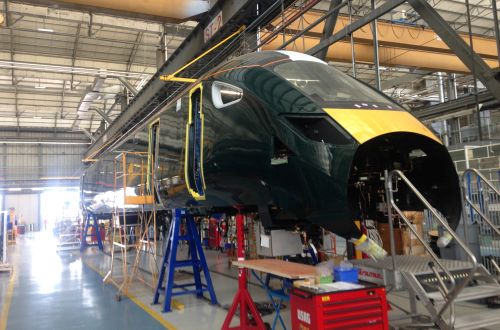 Hitachi is assembling the trains at Pistoia using prefabricated bodyshell sections manufactured at the company’s Kasado plant in Japan. Bogies are being produced at the Hitachi Italy plant in Naples.

The first two Italian-built class 802s are now being fitted out. Train 4 in the overall programme utilises bodyshells delivered complete from Japan whilst Train 5 is the first to use bodyshells welded at Pistoia.

Hitachi expect series production to take 45 days per train, although the first trains will take longer.

Hitachi plans to form and test the first Italian-built train between July and September in Pistoia, with delivery to Britain by December. All 32 remaining Italian-built trains are scheduled for delivery by December 2018 and GWR intends to fully introduce the fleet between January and March 2019, with HST operation of services from London to southwest England ending in early March 2019.

The class 802s are technically very similar to the IEP trains (class 800) being built by Hitachi for use by GWR, featuring the same design of seats, kitchens and most components. Key technical differences include the engine management software, which enables higher power output from the MTU diesel power packs, and newly-designed dynamic braking equipment specifically designed to cope with saltwater ingress on the coastal section of the route between Exeter and Newton Abbot.

The first three Class 802 trains were built at Kasado and two of them are now in transit by ship from Kobe to Southampton.

When they arrive in Britain next month the five-car trains will be moved by road to Doncaster for commissioning and approval testing.

The third Japanese-built class 802 train - a nine car set - will follow in July.