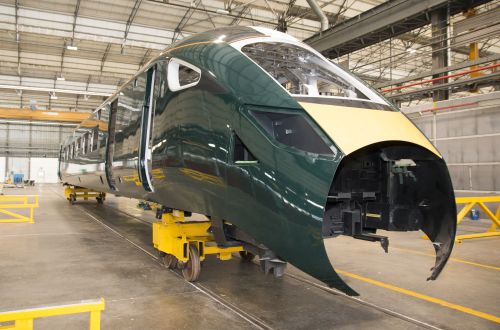 In 2015 GWR placed a £361m order through leasing company Eversholt Rail for 22 five-car and seven nine-car trains. An option for seven additional nine-car sets was subsequently exercised in August 2016. The trains will be introduced on services from London Paddington to Exeter, Plymouth and Penzance from December 2018.

The class 802s are a variant of the class 800 trains currently being built for GWR under the Intercity Express Programme (IEP), but will feature 700kW engines (compared with 560kW for the class 800) and long-range fuel tanks for extended running in diesel mode.

Two five-car trains and one nine-car will be delivered via the port of Southampton in the summer for testing on the coastal section of the Great Western Main Line between Exeter and Newton Abbot. Hitachi Rail Italy’s new depot at Stoke Gifford near Bristol will maintain the trains during the test programme.

The first of the Italian-built trains is due to arrive in Britain at the end of the year. All 93 class 800 and 802 trains for GWR are due to enter service by the end of 2019.