THE first Hitachi class 802 inter-city train for Great Western Railway (GWR) services from London to Devon and Cornwall left the Japanese port Kobe on April 26 on the first leg of its sea voyage to Britain. 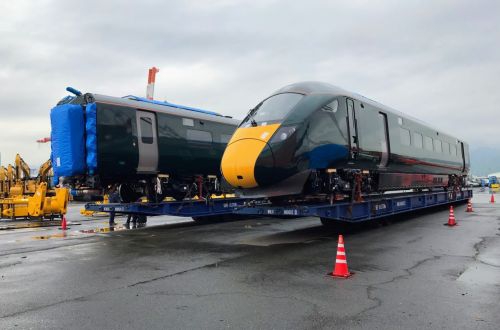 The five-car bi-mode train is due to arrive at the port of Southampton in June.

In 2015 GWR placed a £361m order through leasing company Eversholt Rail for 22 five-car and seven nine-car trains. An option for seven additional nine-car sets was subsequently exercised in August 2016. The trains will be introduced on services from London Paddington to Exeter, Plymouth and Penzance from next summer.

The class 802s are a variant of the class 800 trains currently being built for GWR under the Intercity Express Programme (IEP), but will feature 700kW engines (compared with 560kW for the class 800) and long-range fuel tanks for extended running in diesel mode.

The remainder of the GWR class 802 fleet will be assembled at Hitachi Rail Italy’s plant in Pistoia, where production of the vehicles is now underway.

Three sets will be used for testing in southwest England before the fleet enters passenger service.