HITACHI announced on April 20 that the first of 19 class 802/2 inter-city trains for First Group subsidiary TransPennine Express (TPE) has left the company’s Kasado plant in Japan on the first leg of its journey to Britain. 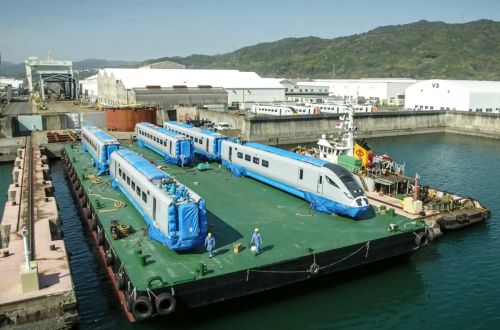 The 200km/h bi-mode (diesel and 25kV 50Hz ac) trains, dubbed Nova 1 by TPE, were ordered in March 2016 and are being procured through leasing company Angel Trains.

Each five-car set will seat 330 passengers compared with 169 on the three-car Siemens class 185 DMUs currently used by TPE.

Three trains are being built at Kasado, with the first set (No 802201) due to arrive in Britain in June. The remaining trains will be assembled at Hitachi Rail Italy’s Pistoia plant.

The entire fleet is due to be introduced in December 2019 on services from Liverpool and Manchester to Newcastle and Edinburgh.

The class 802/2s are part of TPE’s Nova fleet modernisation and expansion programme, which involves the procurement of three new fleets. CAF is supplying 12 class 397 Civity UK inter-city EMUs (Nova 2) for Manchester/Liverpool - Glasgow/Edinburgh services. The first of the five-car trains is due to begin testing at the end of this month.

CAF is also supplying 13 sets of MK5A coaches (Nova 3), the first of which is currently undergoing tests at the Velim test track in the Czech Republic.