THE first of 122 225km/h Super Express Trains (SETs) ordered by Britain's Department for Transport (DfT) as part of its Intercity Express Programme (IEP) left Hitachi's Kasado plant in Japan on January 7 by ship on the first leg of its journey to Britain. 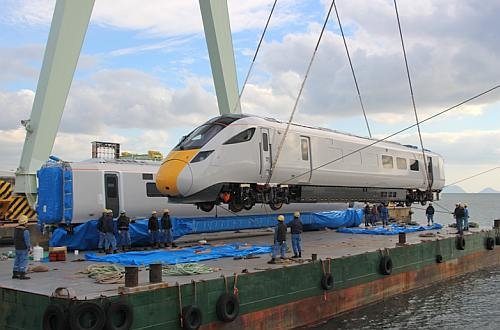 The five-car bi-mode class 800 train is due to arrive at the port of Kobe on January 22 and will be transferred to a larger vessel for the remainder of its sea voyage to Southampton in southern England, where it will be unloaded in March.

Trials are due to begin on the Old Dalby test track near Nottingham in April and the test programme will be managed by Hitachi Rail Europe.

Three pre-series SETs and the first 10 production trains will be built in Japan before assembly switches to Hitachi's purpose-built £82m Newton Aycliffe plant in northeast England, which will assemble the remaining 109 trains.