THE first of three pre-series Super Express Trains (SETs) being supplied to Britain under the Department for Transport's Intercity Express Programme (IEP) was revealed to the press at Hitachi's plant in Kasado, Japan, on November 13. 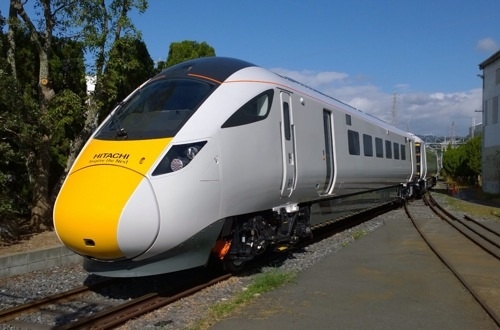 The 225km/h fleet is being financed, supplied and maintained by Agility Trains, a consortium of Hitachi Rail Europe and John Laing under a 27.5-year fixed-price train provision agreement with the DfT.

Agilty will supply a total of 122 trains (866 vehicles) comprising 57 bi-mode (diesel/25kV ac electric) class 800 trains for the Great Western Main Line (GWML), together with 65 bi-mode and electric (class 801) sets for the East Coast Main Line (ECML). The first GWML sets are due to enter service in 2017, coinciding with electrification of the line from London to Bristol and Cardiff, while the ECML trains will be introduced from 2018 onwards.

The first completed train, a five-car class 800 for the GWML, is due to arrive at the port of Southampton in southern England in March 2015 with trials expected to begin at the Old Dalby test track near Nottingham the following month.

Hitachi will deliver three bi-mode pre-series trains, including two five-car sets for Great Western and one nine-car unit for East Coast. With the first set now undergoing static and slow-speed dynamic testing at Kasado, production is at an advanced stage on both remaining pre-series trains.

The first nine production trains will be built in Japan before assembly switches to Hitachi's new purpose-built Newton Aycliffe plant in northeast England, which will assemble the remaining 112 sets. Construction of the Newton Aycliffe plant will be completed by the middle of next year and the facility will start assembling class 800 vehicles in mid-2016.

Kasado will continue to produce aluminium bodyshells and bogies for IEP, and Hitachi is investing in additional capacity at the plant to accommodate IEP production. Hitachi says that in the longer term it hopes to transfer production processes such as friction stir welding of aluminium bodyshells to Newton Aycliffe as and when the plant secures further work.

A detailed update on IEP will appear in the December issue of IRJ.