TRIALS with variable-gauge Talgo coaches are due to begin on the Indian Railways (IR) broad-gauge network next month, with the first nine vehicles due to arrive at the port of Mumbai on April 21. 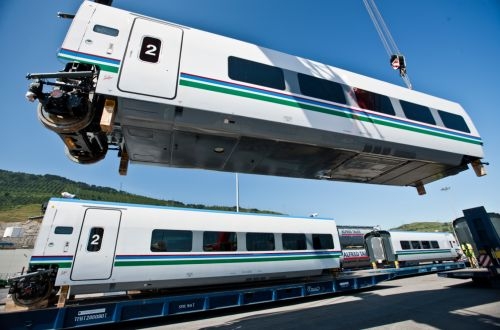 Testing will initially be carried out on the 88km line from Palwal to Mathura and the 97km Bareli - Moradabad line.

IR says that testing at up to 200km/h will take place on the Delhi - Mumbai line following the delivery of a second batch of 30 coaches in mid-May.

A recent study by Japan International Cooperation Agency (Jica) estimated the cost of upgrading the Delhi - Mumbai corridor for 200km/h could reach Rs 600bn ($US 11.3bn), but Talgo claims this speed can be attained without incurring the additional cost of track and signalling improvements.
The company claims that Talgo trains could reduce the travel time on the 1384km route from 16 hours to 12 hours.

After a meeting with railways minister Mr Suresh Prabhu last May, Talgo CEO Mr Jose Maria Oriol told journalists in Delhi that the company could also be willing to establish a manufacturing facility in India if wins a contract to supply trains to IR.

Talgo will conduct the three-month trial entirely at its own cost, even though there is no immediate prospect of an order. "IR has made no commitments to a purchase," a senior ministry official said.