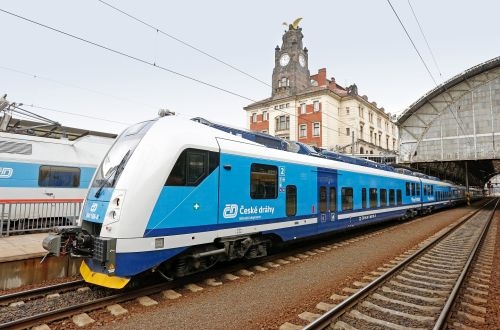 ČD placed an order with Škoda Transportation in August 2014 for 14 of the 160km/h trains, which are equipped to operate under 3kV dc and 25kV 50Hz electrification systems. The fleet will comprise four three-car and 10 five-car trains.

The first Interpanters entered service last December on the Brno – Breclav – Prerov – Olomouc line and ČD expects to receive all eight trains for the Prague - Brno line by July.

The train is low-floor between the bogies and high floor above them, and doors are only positioned in the low-floor sections. The five-car train seats 350 passengers, including 42 in first class.

The train meets the European Union TSI-PRM standard for passengers with reduced mobility, and has one toilet which is accessible for wheelchair passengers. There is a play area for children as well 10 spaces for bicycles, passenger Wi-Fi, and at-seat power sockets.