IRISH Rail (IE) is in talks with Ireland’s National Transport Authority (NTA) on the acquisition of a fleet of electro-diesel trains to enable the extension of Dublin Area Rapid Transit (Dart) services to stations beyond the capital’s electrified suburban network. 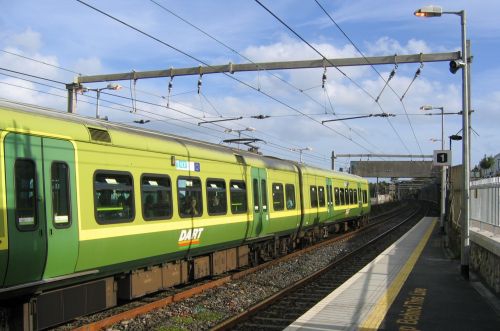 A Dart EMU operating on the electrified network in Dublin.

In an exclusive interview with IRJ on November 23, IE chief executive Mr David Franks confirmed the national railway is in detailed discussions regarding funding for the procurement of an initial tranche of 100 vehicles, which would allow Dart services to be extended north to Drogheda and west to Maynooth.

“We’re talking to the NTA about this now, we’ve been in discussions for about five weeks,” says Franks. “We hope to have the trains in service within four years.”

According to the NTA's Transport Strategy for the Greater Dublin Area 2016 - 2035, significant investment will be required in the Dart fleet to accommodate expansion of the network and growing ridership as well as the replacement the oldest trains. During the period of the strategy it is planned to refurbish or replace most of the current fleet of 154 EMU cars, half of which date back to the launch of Dart in 1984, and acquire additional trains to operate the expanded network.

The Dublin transport strategy proposes further electrification of the network around the capital as part of the Dart Expansion Programme and IE stresses that the decision to procure bi-mode trains does not represent a deviation from this plan.

“We are proposing bi-mode trains based on our fleet strategy to ensure maximum flexibility,” explains IE corporate communications manager Mr Barry Kenny. “While we are strongly advocating that electrification proceed at the earliest possible opportunity, bi-mode will give us the flexibility should such a programme not proceed at the hoped-for pace. We remain committed however to electrification to Drogheda, Maynooth and Hazelhatch, as detailed in the NTA' Strategy for the Greater Dublin Area.”

In October 2008 IE announced plans to order 432 EMU cars for the Dart network, but the procurement was ultimately abandoned due to the economic crisis.

IE is planning to launch 10-minute interval services on the Dart network in the first quarter of next year, but Franks says further improvements and extensions are dependent on the expansion of the rolling stock fleet.

The government is expected to approve a new National Planning Framework within the next few months, which is expected to give greater clarity on the factors that will determine future investment requirements for Dublin’s commuter rail network.

The full interview with Franks will appear in the January 2018 issue of IRJ.

For more detailed information on rolling stock fleet orders around the world, subscribe to IRJ Pro.