ITALY's National Railway Safety Agency (ANSF) says it will issue an Authorisation to Place into Service (APS) on May 29 for the ETR 563/564 Civity EMUs supplied by CAF for the region of Friuli Venezia Giulia, enabling the first trains to enter service within the next few weeks. 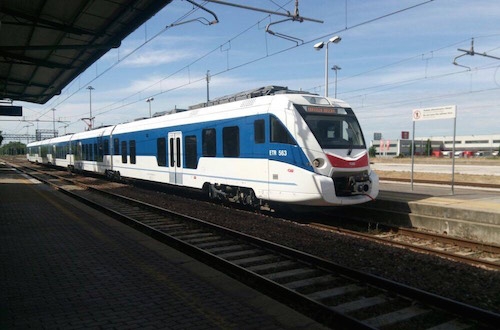 The region placed a €85m order in 2011 for eight trains, including four ETR 564 sets which are equipped for cross-border operation into Austria and Slovenia. CAF was subsequently fined €4.5m for the late delivery of the trains, which were due to enter service in 2013.

Trenitalia, which operates regional services in Friuli Venezia Giulia, together with the region's councillor for transport and infrastructure Mrs Maria Grazia Santoro have now confirmed that the first three trains will enter service when the new timetable starts on June 14.

The five-car EMUs are 91.6m long and accommodate up to 560 passengers, 297 of them seated. Some seats can be removed to enable the trains to carry up to thirty bicycles.

The trains will be used on regional routes such as Tarvisio - Udine - Cervignano del Friuli - Trieste and on weekend services on the Trieste - Gorizia Centrale – Udine line.

The Civity fleet is owned by Friuli Venezia Giulia which assigns the trains to the regional operating company.