The first class E353 tilting EMU built by J-Trec, Japan, for limited express services on the 1067mm-gauge Chuo Main Line has been delivered to JR East's depot at Matsumoto in Nagano prefecture in readiness for the start of mainline trials. 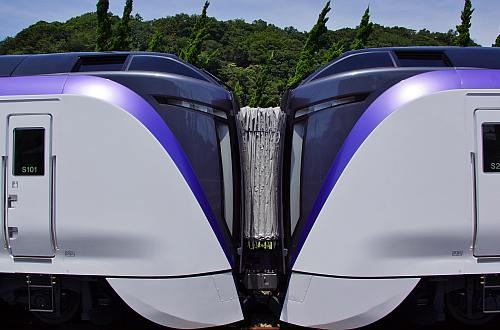 The pre-series train is formed of one nine-car and one three-car set and the 12-car formation will seat up to 686 passengers, 30 of them in Green Car accommodation. The 1.5kV dc 130km/h trains are equipped with retractable gangways in the driving cars to enable operation as nine-car sets on off-peak services. Exterior styling was carried out by industrial designer Mr Ken Okuyama, who has previously designed cars for Porsche and Ferrari as well as JR East's new E235 suburban EMU for Tokyo's Yamanote Line.

The E353s were ordered by JR East in February 2014 and are due to enter service between Tokyo Shinjuku and Matsumoto in the second quarter of next year, replacing E351 Super Azusa EMUs currently used on the Chuo Main Line.

The aluminium-bodied trains are being assembled at J-Trec's Yokohama plant.