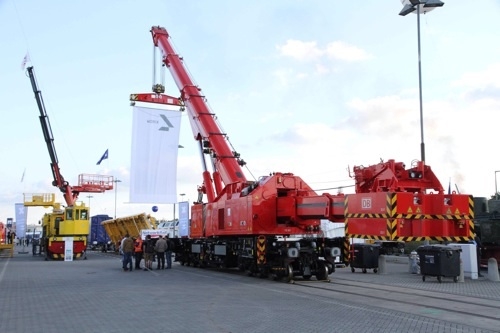 DB Networks ordered five new breakdown cranes and accompanying wagons in 2013, with Kirow acting as lead contractor, in a deal worth around €35m Three 160 tonne capable cranes plus two 100 tonne cranes were ordered. The cranes will replace older breakdown trains dating from the 1970s which are based at key points on the German rail network. Three of these trains are crewed at all times to enable rapid response to incidents anywhere in the country.

Branded the Multitasker 1200 by Kirow, the DB type 732 crane on display is the first of the cranes with a 160 tonne lifting capacity and will be based in Leipzig.

The crane weighs 110 tonnes and can be towed at up to 100km/h. It has a working radius of between 7.5 and 24.5 metres which can be varied thanks to a telescopic jib as required.

When not in use the crane is 15m long, the eight axles ensuring the axleload is no more than 13.9 tonnes. The remaining cranes on order will be delivered in 2014-15.