KOCHI Metro Rail (KMRL) has unveiled the design of the 25 three-car Metropolis trains that Alstom is supplying for the city's new elevated metro line. 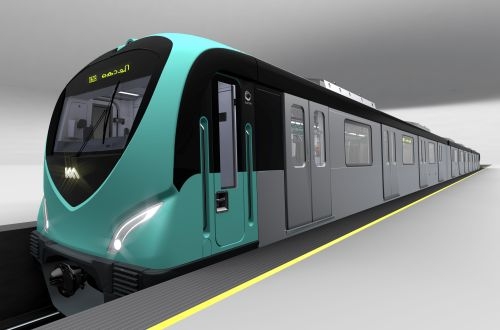 The 65m-long trains will have 136 seats in a longitudinal arrangement and can accommodate up to 975 passengers with each train having four doors and open gangways for easy movement of passengers. The turquoise front of the train represents KMRL's new branding while the front LED lights are in the shape of elephant tusks.

The trains were designed by Alstom's Design and Styling department in Sain-Ouen in collaboration with KMRL and Tata Elxis, India. Alstom was awarded an €85m contract in October 2014 to supply the trains which are being built at its plant in Sricity, Andhra Pradesh.

The 750V dc third-rail trains will be used on the 25.6km north-south line from Aluva to Pettna, which will have 22 stations and a design capacity of 15,000 passengers per hour per direction. Construction is due to be completed by the end of the year and the line is due to be commissioned in June 2016.

The contract includes an option for 25 additional trains, while Alstom was awarded two further contracts worth more than $US 75m to supply CBTC and systems for the line.