MALAYAN Railways (KTMB) launched the first four of 38 new six-car emus into service on March 8. The trains, which are being built by CSR Zhuzhou Electric Locomotive, have capacity for 1200 passengers, which is double that of the current three-car fleet. 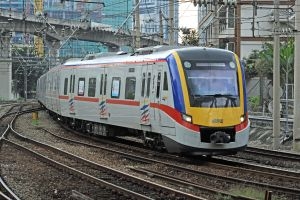 Photo Credit: Photo: Paul Bigland
The remaining trains will be introduced by the end of this year and will allow KTMB to operate a service every 10 minutes, instead of the current 30-minute frequency. A series of cancellations and reliability issues has resulted in a 10% drop in passengers on its services in recent years. KTMB hopes the new trains will reverse this trend and increase ridership from 90,000 to 300,000 passengers per month.
Categories: Asia, Fleet, News, Rolling stock
Tags: CSR, Malayan Railway KTM, Malaysia