LOWER Saxony Transport Authority (LNVG) signed a contract with Alstom and gas supplier Linde Group in Wolfsburg on November 9 for a fleet of 14 Coradia iLint hydrogen fuel multiple units, which will replace diesel trains on non-electrified routes in northwest Germany from 2021 onwards. 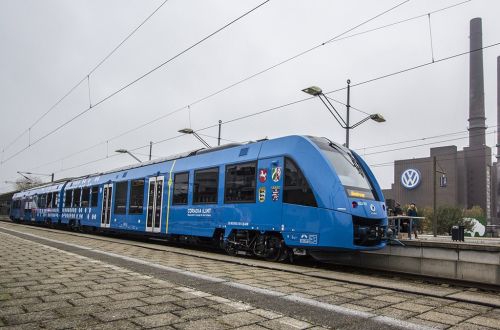 The contract - the first order for the iLint - includes 30 years’ maintenance and energy supply for the fleet. Linde will install dedicated hydrogen refuelling facilities for the fleet of 140km/h trains, which will be capable of operating up to 1000km on a single tank of hydrogen.

Assembly of the two-car trains will take place at Alstom’s Salzgitter plant.

The trains will replace DMUs operated by Elbe-Weser Transport Company (EVB) on services from Cuxhaven to Bremerhaven, Bremervörde, and Buxtehude from December 2021. The existing prototype iLint set, which was unveiled at the InnoTrans exhibition in Berlin in 2016, together with a second pre-series train, will begin trials on the EVB network in spring 2018.

The trains will be maintained by Alstom at the EVB depot in Bremervörde, which will be extended for its new role. The €10m hydrogen refuelling facility at Bremervörde will be funded with the aid of a €8.4m grant from the German federal government’s National Innovation Programme for Hydrogen and Fuel Cell Technology . LNVG will rent the site from EVB and make it available to Linde, which will be responsible for obtaining a construction permit and operating the facility.

In a later phase of the project, hydrogen will be produced on-site at Bremervörde using electrolysis with a wind turbine providing power for the process.

“From now on there will be a real alternative to diesel trains in non-electrified rail transport,” says Lower Saxony’s transport minister Mr Olaf Lies. “Hydrogen and fuel cells are an ideal combination for climate protection as well as for the energy and transport revolution. They allow the storage of energy and emission-free travelling on rail.”