LOHR Industrie, France, has rolled out a prototype of a new low-floor intermodal wagon designed to carry semitrailers with a corner height of 4m on routes where this has previously not been possible. 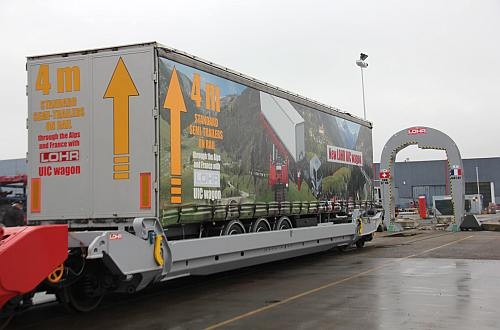 Dubbed the Lohr UIC wagon, reflecting its conformity with UIC standards, the vehicle will allow standard semitrailers, including mega-trailers, to be carried on existing routes with a P385 loading gauge without any modifications to the infrastructure.

Tests carried out on the Gotthard route last October proved successful, and there are plans to start regular services on this route between the Ruhr and northern Italy under the name Viia Transhelvetica at the end of 2016.

The new wagon is a modification of the existing Modalohr design, which has been in use in France for the last ten years. A specially developed device allows the floor level of the wagon to be adjusted according to the height and weight of the load. In addition the side walls have been reduced in height, allowing cranable trailers to be loaded if desired.

Unveiling the wagon to the press at Lohr's Duppigheim plant near Strasbourg on January 23, the company's supply chain director Mr Hervé Morel said: "We are seeing a world premiere today. We have experience of carrying hundreds of thousands of units, day and night in all weather conditions, and the system works."

Other routes are in the pipeline to link Lille with Bayonne and Calais with le Boulou.

The system is designed for horizontal loading of units which cannot be lifted by crane; it can accommodate not only semi-trailers but also tankers, tractor units, complete lorries and special units. Non-cranable semitrailers now account for 95% of the European market.