TRANSPORT for Greater Manchester (TFGM) celebrated a milestone in the delivery of its fleet of M5000 LRVs on June 15 when the 100th vehicle was unloaded at Metrolink's Queens's Road depot. 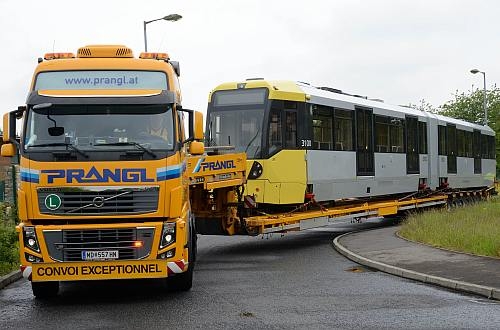 The M5000s are being supplied by a consortium of Bombardier and Vossloh Kiepe, with assembly being carried out at Bombardier's plant in Vienna.

The first M5000 entered service on the Piccadilly – Eccles line in December 2009 and the fleet has grown steadily to support the expansion of the Metrolink network and enable the replacement of the AnsaldoBreda T-68 trams, the final examples of which were withdrawn last year.

The 100th vehicle is one of a batch of 10 LRVs ordered at the end of 2013 to expand the fleet in readiness for the extension of the network to Trafford Park. TfGM placed a further order for 16 vehicles last September which will take the fleet to 120 units by 2017.