IRJ at InnoTrans 2014: HUNGARY's national transport authority has approved the trial passenger operation of MAV-Start's two prototype IC+ coaches, which have been designed and built in-house at the national passenger operator's Szolnok workshops. 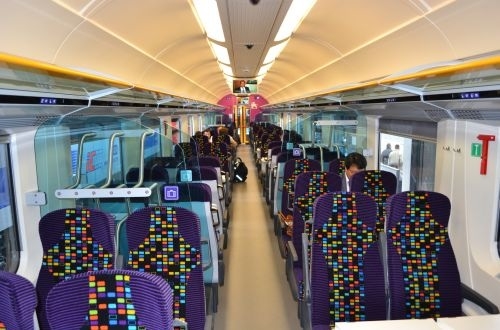 One of the two pre-series vehicles is on display at the InnoTrans exhibition in Berlin this week.

The coaches are intended for international operation, although accessibility standards have changed during the three-year development phase, which means series vehicles will require redesigned stairways if they are to operate in passenger service outside Hungary.

Testing of the air-conditioned, 200 km/h carriages was mostly carried out in Austria and Switzerland and will now continue in Hungary, where the coaches will be used on regular passenger services.

Design and production of the two carriages was partially financed by the EU, which provided a Forints 462m (€1.5m) grant towards the Forints 1.4bn project.

MAV-Start has been in talks with Russian Railways (RZD) regarding a potential order for 1520mm-gauge coaches.

Neither of the standard class prototype vehicles are accessible for passengers with reduced mobility, although MAV-Start says it can offer first class and dining vehicle equipped for wheelchair access.