AROUND 10 years after their delivery to EAV in Naples, 21 of 26 three-car ETR 211 Metrostar EMUs supplied by the AnsaldoBreda-Firema Trasporti consortium are back in service on the Circumvesuviana narrow-gauge network. 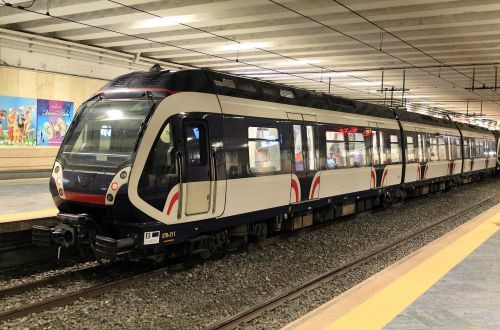 A Metrostar EMU back in service in Naples.
Photo Credit: Falk 2/Wikipedia CC by SA 3.0

The trains were plagued by a series of technical failures which became so serious that by the end of 2013 only three trains were operational. EAV launched a dispute with the suppliers in May 2014 and engaged a panel of experts to define the causes of the problems with the trains and to determine responsibility.

However, by the end of 2015 it was still unclear whether the dispute could be resolved in a reasonable time while EAV was short of rolling stock. In April 2016 EAV decided to bite the bullet and pay €28m to AnsaldoBreda to end the dispute and repair 21 trains. EAV says the other five trains were damaged as a result of accidents.

EAV is also expecting to receive 12 revamped trains from Euromaint, Germany, by April.

In the meantime, the governor of Campania region, Mr Vincenzo De Luca, has pledged that 44 new trains will be ordered soon through a public tender.