MITSUBISHI Heavy Industries (MHI) is preparing to deliver a new five-car rubber-tyred suburban train to the Tokyo Metropolitan Government's Bureau of Transportation for use on the Nippori - Toneri line from October 10. 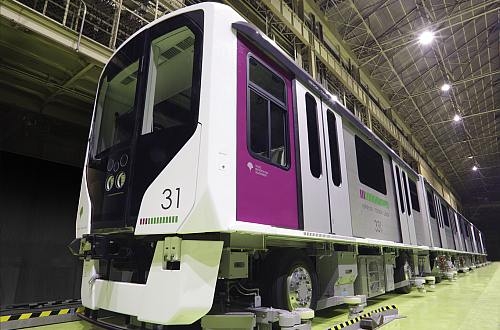 The new light-weight Model 330 trains are designed to boost passenger capacity, particularly during the morning and evening peak. The train features MHI's G-Fit longitudinal seating which boosts seating capacity by 19 compared with existing sets, while offering an overall capacity increase of 97 passengers in each five-car train. The trains are also 1.5 tonnes lighter than existing models used on the line, which is made possible through the use of a double-skin aluminium body structure.

MHI says the reduction in train weight reduces energy consumption and increases service life for components. The trains also utilise new T-smover bogies, which are lightweight, offer low noise and vibration, and are straightforward to maintain.

The 9.7km Nippori – Toneri line connects Nippori station in Arakawa-ku with Minumadai-shinsuikoen station in Adachi-ku. Ridership has increased steadily since the line opened in 2008, which combined with new developments along the line, led to the procurement of the additional rolling stock.