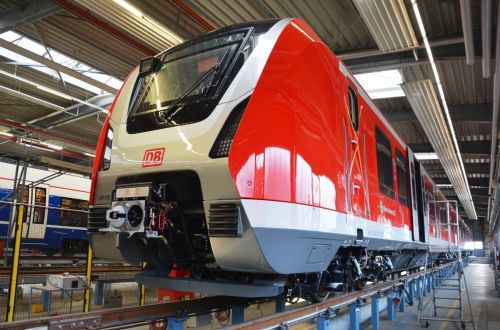 Six extra trains are required to enable six-car operation of all services on Line S11, while four sets will be used to extend the operation of nine-car trains on the core Neugraben - Innenstadt - Elbgaustrasse section of Line S11. The remaining two sets are being procured to increase fleet flexibility and provide cover if trains are unavailble for service.

Bombardier in June 2013 in a €327m deal which includes four dual-voltage sets capable of operating on both the 1.2kV dc third rail S-Bahn network and the standard German 15kV 16.7Hz ac overhead system. The first train arrived at S-Bahn Hamburg’s Ohlsdorf depot last month and the fleet is due to enter service from the end of 2018.

The Hamburg Senate says some sections of the S-Bahn network are now reaching capacity and with the city’s population forecast to increase to more than 2 million in the near future, the system will need to accommodate further ridership growth.

The delivery of the Bombardier trains will enable the operation of six-car trains seating 380 passengers on all routes, expanding the S-Bahn train fleet from 164 to 184 sets.

S-Bahn Hamburg was awarded a 15-year contract extension in 2013 to continue operating the network until 2023.