HUNGARY’s national passenger operator MÁV-Start has initiated a project to build a further 70 IC+ long-distance coaches at its Szolnok workshops. 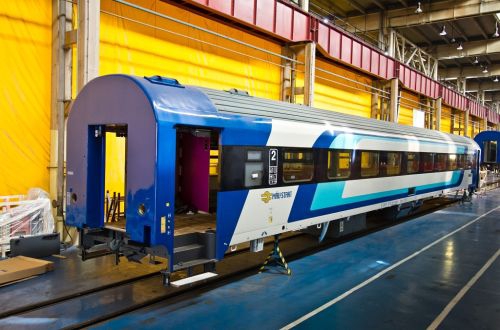 The project is being financed by the state budget as compensation for the government’s failure to finance losses from the operation of passenger services in recent years.

MÁV-Start is already producing a batch of 20 IC+ coaches with 200km/h bogies from Siemens for use on international trains.

Originally, the new project was for 100 coaches capable of 160km/h, which would enable the use of domestically-manufactured bogies. However, the call for tenders for tenders for components specifies 200km/h bogies for just 70 coaches.

MÁV-Start originally planned to start series production of IC+ vehicles in 2013, but only two prototypes have been completed so far.

Following modifications to the original design to satisfy TSI requirements, MÁV-Start began building 20 multi-purpose carriages at Szolnok. The second-class coaches will have spaces for wheelchairs and bicycles, while the first class vehicles will feature a buffet section and business class seating.

Manufacturing of the first batch of production vehicles started in May 2017 and the coaches were due to enter service next month, although none are yet close to completion.

MÁV-Start announced last year that it plans to introduce two-hourly IC Plusz trains on the Hungarian network from December 2019, but this could be pushed back to 2020 or even later if insufficient IC+ coaches are available for traffic.

However, the availability of large numbers of TSI-compliant 200km/h vehicles means the fleet could be used on international trains, enabling MÁV-Start to improve service standards as it prepares for the liberalisation of the Hungarian passenger market in 2023.