The new locomotives will offer 90% fewer emissions than legacy units. 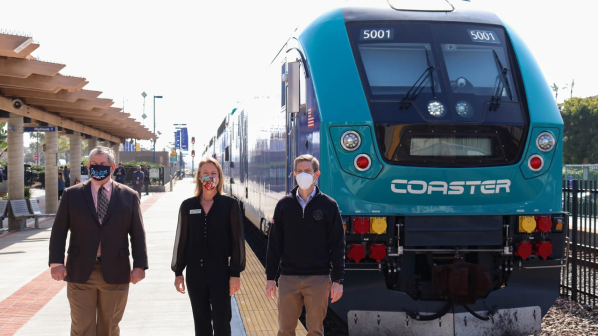 The five locomotives were purchased under a framework contract in 2018. A further four locomotives have since been ordered under the contract, including two in 2019 and two more in October 2020.

The new locomotives will replace NCTD’s ageing fleets of five F40PHM-2C and two F59PHI locomotives, and will offer a 90% emissions reduction, in line with current Californian air quality regulations.

The locomotives were financed through a $US 10m grant from the San Diego County APCD Carl Moyer Program and approximately $US 46.6m from the state of California Senate Bill 1 (SB1). Funding to overhaul the double-deck coaches comes from federal, state and local sources.

The overhauled Coaster coaches and cab cars feature a new colour scheme, as well as new seat upholstery, carpets and LED lighting, and some seats include charging points.

NCTD also ordered a further 11 double-deck coaches from Bombardier for use on the Coaster route in July 2020. The coaches, which comprise eight double-deck coaches and three cab cars, cost a total of $US 43m and are scheduled to enter service in winter 2022.

NCTD’s rolling stock acquisitions are part of its plans to increase Coaster train frequencies from an average of 22 to 42 trains per weekday over the next three to five years. Funding for the acquisitions is being provided by the San Diego Association of Governments (Sandag).

“Sandag is proud to have helped NCTD leverage their investment into the Coaster by providing $US 58.8m toward an additional two new trains, supporting the region’s complete corridors strategy to provide competitive travel choices to support regional mobility and meet our state-mandated greenhouse gas emissions goals,” Blakespear says.