THE first of 32 EMUs being supplied to Croatian Railways (HŽ) by Končar, Croatia has entered passenger service on the lines from Zagreb to Koprivnica and Sunja. 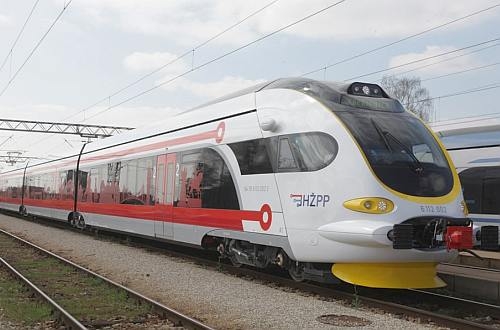 HŽ placed its largest ever rolling stock order in January 2014, when it signed a Kuna 1.63bn ($US 290m) contract with Končar for 16 regional EMUs, 16 suburban EMUs, and 12 regional DMUs. Seventeen of the trains, including 16 EMUs and one DMU, will be delivered this year and the entire fleet is due to enter service by 2017.

The first train is a 160km/h four-car regional train, which accommodates up to 419 passengers, 210 of them seated. The train is equipped with passenger Wi-Fi and a GPS passenger information system.

The introduction of the new trains coincides with the launch of a new brand identity for HŽ Passenger Transport, which will be applied to all of the new trains, as well as the company's website, new sales channels, and new staff uniforms. HŽ is upgrading its fares system with new ticket machines, website, and contactless smartcards due to be launched in the fourth quarter of this year.