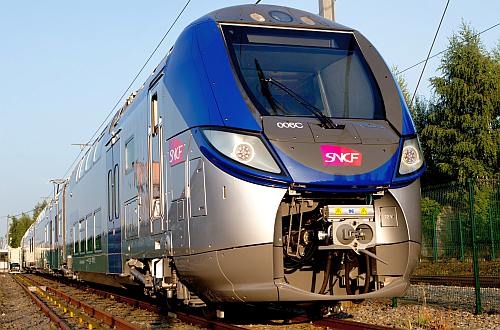 Six regions including Aquitaine, Brittany, Centre, Nord-Pas de Calais, Provence-Alpes-Côte d'Azur, and Rhône-Alpes ordered a total of 129 sets in varying configurations in 2010, and if all options are exercised, Bombardier could eventually supply 860 trains.

The modular articulated emu can be supplied in suburban, regional, or intercity configuration, with train lengths ranging from 81 to 135m. Capacity ranges from 350 to 660 seated passengers on trains with a 2+2 seating layout.

Static testing began in February 2012 and the dynamic test programme was launched at the Velim test circuit in the Czech Republic last September. Over the last year, the test fleet has completed 100,000km of single-unit operation and 20,000km of multiple operation.

The first three production trains will be delivered to Rhône-Alpes in December for comissioning. This will allow testing to be carried out in winter conditions on the Bourg St Maurice line in February.

Bombardier says it has audited 45 of 120 suppliers involved in the project to ensure they can support the accelerated rate of production.