BOMBARDIER Transportation and Hitachi Rail have agreed to join forces to bid for a £2.75bn contract to supply a minimum of 54 360km/h trains for operation on Phase 1 of Britain’s HS2 high-speed line linking London and Birmingham, and CAF has been invited to bid. 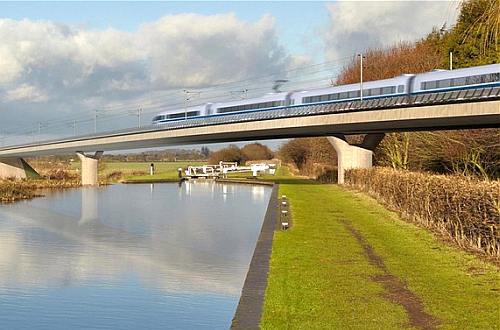 HS2 Ltd shortlisted Alstom, Bombardier Transportation, Hitachi Rail Europe, Talgo and Siemens to bid for the contract in November 2017. However, HS2 Ltd has now invited CAF to join the list of shortlisted bidders so there will still be five bidders when HS2 Ltd invites the companies to tender later this year. The contract is expected to be awarded in late 2019 and the fleet must be operational by 2026 in time for the opening of the high-speed line.

The new trains must be compatible with Britain’s restrictive loading gauge to enable through operation on conventional lines north of Birmingham.

The winner of the contract will maintain the fleet at a new depot to be built at Washwood Heath in Birmingham, which will also be the location of the HS2 control centre.

Bombardier and Hitachi collaborated on the production of a fleet ETR 1000 high-speed trains for Trenitalia as a result of Hitachi’s acquisition of AnsaldoBreda. Hitachi supplied a fleet of class 395 Javelin 225km/h trains for operation of domestic services on HS1 linking London with Ashford, and is currently supplying 200km/h class 800/801 trains for Great Western Railway and London and North Eastern Railway under Britain’s £5.7bn Intercity Express Programme.

The two companies say that responsible procurement, in terms of long-term employment and reducing environmental impact, will be a cornerstone of their bid. “The ETR 1000 train used 85% recycled materials and the joint bid for HS2 would deploy the latest noise reduction technology,” they said.

CAF says it intends to offer its Oaris high-speed train when it submits its bid. "CAF plans to build the trains in its manufacturing facility currently being constructed in Newport, Wales," says Mr Richard Garner, CAF's UK director.