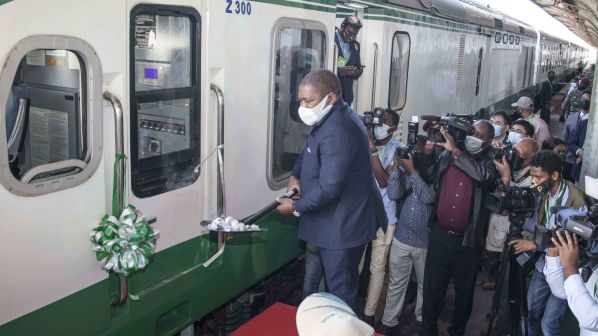 Mozambique's president, Mr Filipe Nyusi, cuts the tape to inaugurate one of the first two of the new CFM DMUs.
Photo Credit: CFM

NEW rolling stock has been acquired by Mozambique Ports and Railways (CFM) to strengthen passenger and freight transport capacity in the south of the country.

The first new rolling stock to arrive comprises two DMUs for use in the Maputo metropolitan area and 150 high-sided wagons for the transport of ore.

Speaking at the inauguration ceremony, Mozambique’s president, Mr Filipe Nyusi, urged the management of CFM to do everything they could to maintain and refurbish its track and rolling stock, as the people of Mozambique deserved to travel quickly and comfortably.

He said that in turn people should respect CFM’s investment in new rolling stock. “Do not scratch or tear the seats and, when they are old, the company will know how to do the maintenance,” Nyusi urged the public.

After travelling by train from the CFM station in central Maputo to Machava, in Matola municipality, Nyusi said that investment in the DMUs would help to meet local transport needs, increasing capacity in line with the objectives of the government's five-year plan for 2020-2024.

He explained that while the original plan had been to purchase 90 ordinary coaches, that deal had since been converted into an order for five DMUs, each able to accommodate 633 passengers.

Nyusi said that the 150 new ore wagons were essential for generating freight revenue which in turn could subsidise passenger operations. He added that the independent rail telecommunications system which had been recently been installed was a “fundamental tool for managing operations and promoting rail safety.”

A freight service linking the port of Maputo in Mozambique with three major Zimbabwean trade hubs also began in July 2021, operated by Unitrains Africa in partnership with CFM and Traxtion.