New Stadler EMU for Westbahn on test in Austria

THE first Stadler Kiss 2 EMU for Austrian open-access operator Westbahn arrived in Austria at the end of October for trials. 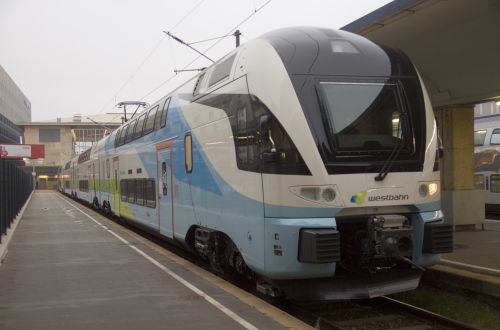 The new trains – designated class 4110 - are similar to the Kiss sets delivered to Westbahn in 2011, but feature a number of improvements including redesigned bogies, single-leaf sliding doors and a smaller cab windscreen. The two latter enhancements should help to improve the interior pressure performance of the EMUs, which had been criticised in the first-generation vehicles.

Trials are now being carried out on the Austrian main line network to ensure the trains conform with Austrian Federal Railways (ÖBB) infrastructure. Type approval has already been obtained in Switzerland.

Westbahn has ordered nine four-car EMUs and one six-car EMU, which will be delivered during 2017.

Westbahn will introduce a new hourly fast Vienna - Linz - Salzburg service in December 2017 which will operate from Vienna Main Station, and complements the existing hourly service from Vienna West Station to Salzburg, which has more intermediate stops. Alternate fast services will be extended from Salzburg to Innsbruck.