THE launch of two new rolling stock fleets for the Italian region of Tuscany was marked at Florence Santa Maria Novella station on February 13, when trains of both types were formally presented to regional president Mr Enrico Rossi by Mr Orazio Iacono, Trenitalia's national director of regional transport. 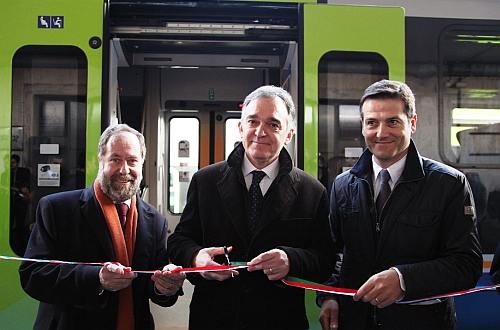 From the second half of this year 12 Alstom Jazz EMUs will be introduced on Florence – Prato – Pistoia, Florence – Valdarno and Florence – Empoli services. The 160km/h articulated trains will seat up to 290 passengers with two wheelchair spaces. The fleet is part of a €450m order for 70 trains awarded to Alstom by Italian State Railways in November 2012. The trains are based on Alstom's Coradia Meridian platform and are being assembled at the company's Savigliano plant.

Pesa is supplying 13 ATR 22 DMUs for use on non-electrified lines as part of a €139.6m order for 40 trains placed by Trenitalia in 2013. The trains will seat up to 161 passengers with two wheelchair spaces and will be used in the Sienna area and on the Pisa – Lucca – Aulla line. Three trains are already in service on the latter route.