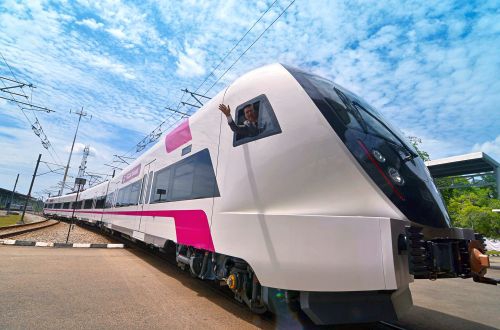 ERL signed a contract with CNR Changchun (now part of CRRC) in November 2014 for six four-car trains to supplement the fleet of six Siemens Desiro ET 425M EMUs introduced when the 57km standard-gauge line opened in 2002.

Two of the six trains will be used for Klia Ekspres, and four (including the first train) for Klia Transit stopping services. The 25kV 50Hz ac sets have a maximum speed of 160km/h with onboard features including infotainment systems, Wi-Fi, wheelchair compartments, and baggage racks. Each train will accommodate up to 540 passengers.

The new trains will enter service from March 2017, enabling ERL to boost capacity by 50% to meet surging ridership demand. With the full introduction of the new fleet, ERL plans to cut Klia Transit headways from 30 to 20-minutes off-peak and from 20 minutes to 15 minutes at peak times. Klia Ekspres services will continue to operate at 15-20 minute intervals.