POLAND's National Centre for Research and Develoment (NCBiR) has agreed to provide funding for a project by Newag to develop what it describes as "the first worldwide family of autonomous, configurable bi-mode passenger rail vehicles compliant with Technical Specifications for Interoperability (TSI)." 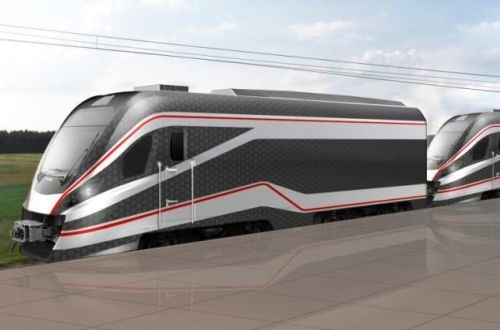 NCBiR will contribute a maximum of Zlotys 15.4m ($US 3.9m) to the project which has a total estimated cost of Zlotys 38.5m.

The hybrid train, which Newag plans to complete by April 30 2018, will consist of a three-car EMU powered by 3kV dc overhead catenary attached by a Scharfenberg coupler to a diesel power module. The power module will be fitted with motors powering a generator set. The generated power will be transmitted to the EMU to power bogie-mounted traction motors.

Depending on the client's needs, the diesel power module will be fitted with either a driver's cab together with an auxiliary driver's console at the rear, or only with auxiliary driver's conoles. The former configuration will have full driving functionality and can be operated from the EMU when it is at the rear of the train avoiding the need to for the module to switch ends at terminal stations.

Newag says an advantage of its solution, compared with a typical hybrid solution where diesel engines are fitted to an EMU, is reduced mass which will help to cut operating costs. The vehicle will feature a modern electric power and a control system designed to optimise energy consumption, and a power recuperation and storage system so that energy generated during braking can be reused.

The power module will meet C1 crash standards according to EN-PN 15227. The vehicle will comply with the following TSIs: locomotives and passenger rolling stock (LOC&PAS), noise (NOI), safety in railway tunnels (SRT), persons with reduced mobility (PRN), and control, command and signalling (CCS).