JUST a month after it received its final Stadler Rail Flirt 3 Sprinter EMUs, Netherlands Railways (NS) revealed another new suburban train at Nedtrain’s Zaanstraat workshop in Amsterdam on October 19, when the CAF-built New Generation Sprinter (SNG) was presented to the press for the first time. 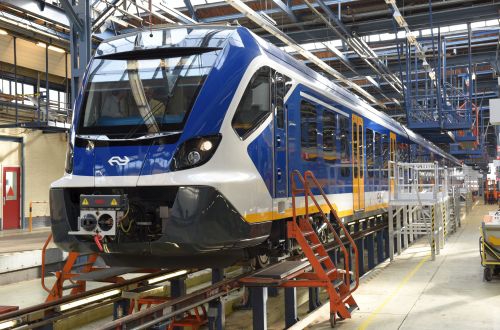 Following the debacle with the AnsaldoBreda V250 high-speed trains, the procurement of new rolling stock has become a very sensitive issue for NS and the operator was keen to show that it has learnt the lessons from this disastrous episode.

During the ceremony both NS and CAF stressed the effectiveness of their intensive cooperation through the design, production, authorisation and future operation of the new trains. A team of NS engineers is permanently based at the CAF plant in Beasain, Spain, where they are responsible for monitoring and controlling the production process and approving components.

Following a competitive tender, NS awarded CAF a €510m contract in December 2015 to supply 118 articulated EMUs based on the company’s Civity platform. The order comprises 68 three-car sets (NS class 2300) and 50 four-car trains (class 2700). Deliveries will be completed in 2019.

Testing of the 1.5kV dc trains took place at the VUZ Velim test centre in the Czech Republic and the Rail Tec Arsenal climatic chamber in Vienna. SNG sets are now undergoing tests on the Dutch mainline network as part of the process of acquiring an Authorisation to Place in Service (APS), the permit required for the trains to operate in commercial service.

The SNG has been designed to comply with TSI-PRM (Passengers with Reduced Mobility), and features accessible toilets, level boarding, and space for bicycles.

An intelligent lighting system varies the luminosity according to ambient light levels. The train is equipped with Wi-Fi, power sockets, and USB ports, and waste bins are compartmentalised for recycling. The interior has been developed in close consultation with user groups.

The SNG is equipped with a specific transmission module (STM) for compatibility with the Dutch ATB train protection system.

The trains will enter passenger service at the end of 2018, initially around Amsterdam, Hoorn and The Hague. SNG sets will also be deployed on regional services in the Friesland and Groningen areas.

The first deliveries will provide NS with a much-needed capacity boost, but as more trains enter service NS will withdrawn its ageing two-and-three-car SGMm Sprinter EMUs (NS class 2100 and 2900), which were built between 1975 and 1983.