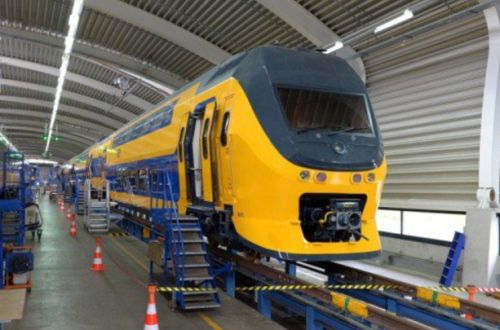 The prototype train will be used to evaluate interior finishes and features as well as passenger reaction.

The €450m VIRM midlife refurbishment programme will cover the modernisation of the entire fleet of 81 trains, which were built by Talbot and Bombardier from 1994 onwards.

The project will be completed in 2020 and Nedtrain will refurbish an average of 20 trains a year.

While the exterior retains the familiar NS yellow and blue livery, the interior has been completely renewed with a revised layout, which largely follows the format of the NID double-deck inter-city trains, which were converted from DD/AR regional trains in 2010-13.

The upper floor of the VIRM trains will have a ‘business character’ and airline seating with fold-down tables for passengers who want to read or work during the train ride. Part of the upper floor is designated as a quiet zone.

The lower deck is more ‘informal’ with most seats grouped in 2+2 bays, with longitudinal ‘couches’ at the outer ends of some vehicles. New features include passenger Wi-Fi and real-time information screens. A wheelchair-accessible toilet has been installed to comply with TSI-PRM (Passengers with Reduced Mobility) and toilet compartments are fitted with seperate urinals - a first for an NS train.

Elevators for catering trolleys have been removed as NS no longer provides catering on services operated by VIRMs. This space has been used for additional luggage storage.