THE Norwegian government has allocated Norwegian State Railways (NSB) NKr 1.55bn ($US 190m) towards the acquisition of 26 additional Stadler Flirt EMUs as part its 2016 state budget, which was unveiled on October 7. 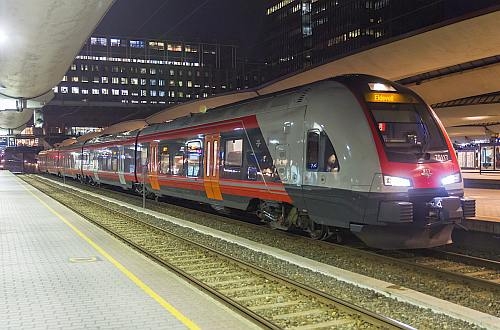 The state will fund 75% of the order value with the remainder coming from NSB. The extra trains will be deployed in the Bergen area, in eastern Norway, and on the Oslo - Gjøik line, increasing capacity and enabling the withdrawal of life-expired rolling stock.

"This means we can continue to replace our oldest trains with modern and environmentally-friendly rolling stock, while offering more capacity to our customers," says NSB CEO Mr Geir Isakson.

NSB placed an initial order with Stadler in 2008 for 26 commuter and 24 intercity trains and subsequently exercised options for a further 31 sets. So far 68 of these five-car trains have entered service, and the order for additional trains will take the fleet to 107 sets.

The state budget allocates NSB NKr 3.2bn for the operation of state-funded passenger services in 2016, a slight decline compared with the budget for this year. The government says increasing passenger numbers on a number of routes has reduced the requirement for state support.