SPORVEIEN, which operates a six-line tram network in the Norwegian capital Oslo, has awarded a contract worth in excess of €200m to CAF for a fleet of 87 LRVs with an option for another 60 vehicles. 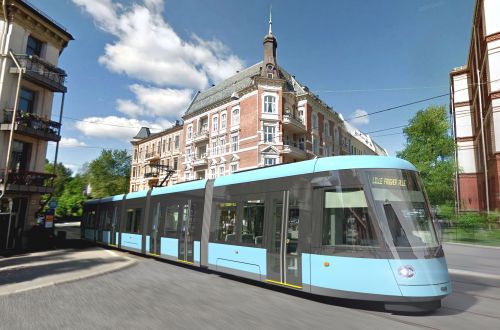 Artist's impression of the CAF Urbos LRV for Oslo.

“This marks one of the largest tram contracts that CAF has been awarded to date, and is the largest tender, in terms of volume, open this year on the tram market,” CAF says.

The new 100% low-floor vehicles will replace Sporveien’s existing fleet of 72 trams of two different types. With 200 seats per vehicle, the new LRVs will also be larger than those they will replace.

Sporveien carried 51 million passengers on its tram network in 2017. “With the 87 new trams, it will be possible to carry around 100 million annual travellers,” says the head of Sporveien, Mr Cato Hellesjø. “This will be an important contribution in Sporveien's efforts to develop and improve public transport in Oslo.”

The LRVs will be based on CAF’s Urbos 100 design and are similar to the LRVs which it supplied to Nantes, France, but will be adapted to withstand the harsh Norwegian winter. Each 42.7-tonne vehicle will be 34.16m long with six double doors.

The vehicles will be fitted with a radar system to avoid collisions with pedestrians, as well as Wi-Fi, USB chargers, and passenger information display screens. CAF says the vehicles will be designed to reduce their environmental impact from the design phase, through manufacturing, and during their operating life, and with recyclability in mind when they are withdrawn from service.

The first two vehicles will be tested and evaluated in 2020. Delivery of the fleet will start in 2021 and be completed in 2024.