ILE-de France Mobility, which is responsible for public transport in the Paris region, has unveiled the design for its fleet of RER New Generation (NG) trains which form part of its ambitious plans to replace or renovate more than 700 trains between 2016 and 2021. 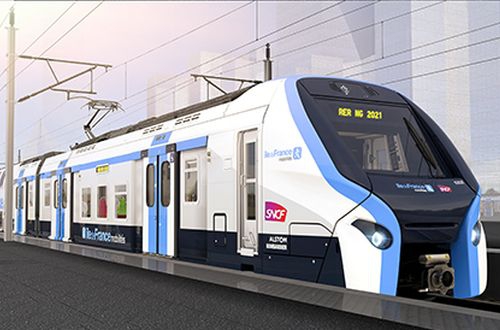 The fleet of 255 NG trains, which will be built by Alstom and Bombardier under a €3.75bn framework contract awarded by French National Railways (SNCF) in January 2017, is destined for RER lines D and E. The first firm part of the order is worth an estimated €1.55bn (70% Alstom - 30% Bombardier) and comprises 56 112m-long and 15 130m-long trains which will enter service from 2021 onwards. The longest version will be able to transport up to 1860 passengers.

The trains will be fitted with information screens along with multiple USB ports, and an enhanced CCTV system to improve passenger security.

An informal working group was set up in April 2017 between Ile-de-France Mobility, SNCF, Alstom and Bombardier to finalise the design using the latest technology such as virtual reality and 3D printing. This enabled the design to be completed in 18 months.

View of the lower deck of the RER NG trains.