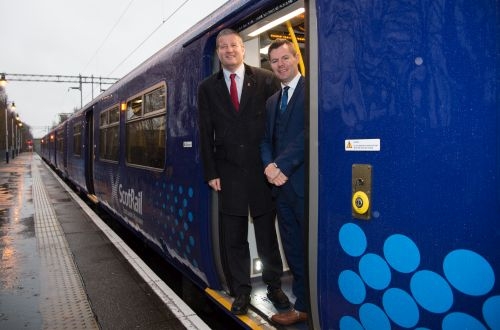 Over the next three years 180 vehicles will be added to the fleet and two thirds of existing ScotRail trains will be refurbished by 2018. More than 17,000 at-seat power points will be installed and 346 more trains will be equipped with passenger Wi-Fi.

From autumn 2017 new Hitachi class 385 EMUs will be introduced on the newly-electrified Edinburgh - Falkirk High - Glasgow Queen Street line and the entire fleet of 46 three-car and 24 four-car sets will enter service by December 2018. The trains will also be deployed on six other routes, including:

From autumn 2017, 27 High Speed Trains (HSTs) formed of two power cars and four or five intermediate trailers will replace class 170 DMUs on services from Edinburgh and Glasgow to Aberdeen and Inverness, as well as on the Aberdeen - Inverness line. ScotRail says this will increase seating capacity on internal long-distance services by an average of 36%.

All 21 of ScotRail's three-car class 318 EMUs are being refurbished with wheelchair spaces, at-seat power sockets, passenger Wi-Fi, cycle storage, CCTV, and accessible toilets to comply with Rail Vehicle Accessibility Regulations 2010 (RVAR), which come into effect in 2020. The fleet will be used on suburban services in the Glasgow area.

By August 2016 the fleet of 22 three-car class 320 EMUs will be supplemented by seven additional trains, which will be converted from almost-identical class 321 trains transferred from England. These trains will be upgraded by owner Eversholt Rail to the same standard as ScotRail's existing refurbished class 320s.