ABELLIO ScotRail marked the launch of its new fleet of Hitachi class 385 EMUs on July 23 with an inaugural passenger run from Glasgow Queen Street to Edinburgh Waverley. 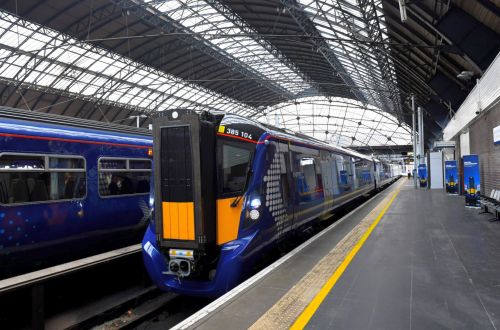 The 160km/h trains entered revenue service on the Glasgow - Falkirk High - Edinburgh route on the morning of July 24, with one train in traffic formed of a three and a four-car set. Electrification of the line at 25kV 50Hz ac was completed last year as part of the Edinburgh - Glasgow Improvement Programme (Egip) and electric services began in December, initially using Siemens class 380 EMUs and more recently class 365 trains displaced from London - Peterborough/King’s Lynn services by the introduction of new Siemens class 700 EMUs.

Ordered in March 2015 in a £370m deal financed by Caledonian Rail Leasing, the class 385 fleet comprises 46 three-car and 24 four-car trains. The first seven trains were built at Hitachi’s Kasado plant in Japan, with the company’s facility at Newton Aycliffe in northeast England assembling the remaining sets.

Entry into service was delayed after drivers reported experiencing glare from signals when driving at night. The design of the windscreen has since been revised and Hitachi developed an alternative design after consultation with a number of suppliers. One train was fitted with two different designs for evaluation with drivers and, based on their feedback, a flatter windscreen was adopted to replace the original curved glass.

Existing trains are being retrofitted with the new windscreens at Knorr-Bremse’s Springburn facility in Glasgow.

In addition to the Edinburgh - Glasgow route, the trains will be deployed on six other lines: