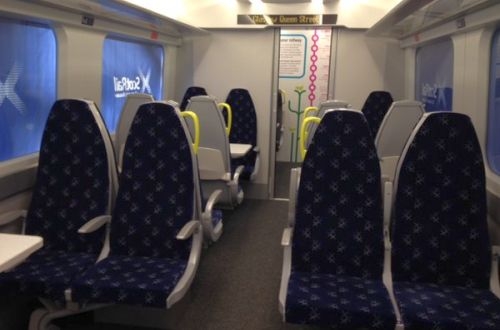 The mock-up is open to the public and showcases first and standard class saloons for the £370m fleet of 24 four-car and 46 three-car regional trains, which will enter service in central Scotland between 2017 and 2019.

The class 385s will be equipped with LED lighting, power sockets and free passenger Wi-Fi. There will be five large luggage racks on each four-car train and four on the three-car variant.

Fabrication of the first bodyshells began last October at Hitachi's Kasado plant in Japan, where the first six trains are being built. The remaining 64 trains will be assembled at Hitachi's new British plant at Newton Aycliffe in northeast England.

The first set will be delivered to Scotland in October, followed by a second train in November and a third in December. Driver training is due to start in March 2017 and the four-car trains will enter service in autumn 2017 on the newly-electrified Edinburgh - Falkirk High - Glasgow Queen Street line and by December 2017 all ScotRail services on this route will be operated by class 385s.

From early 2018 the trains will be introduced on Edinburgh - North Berwick and Glasgow Queen Street - Cumbernauld - Falkirk Grahamston services. Class 385s will be deployed on Glasgow/Edinburgh - Stirling - Dunblane/Alloa and Glasgow Central - Cathcart Circle/Nielston/Newton services from the end of 2018.

Eight-car operation will begin on the Edinburgh - Falkirk High - Glasgow Queen Street line in December 2018, when the final trains will be delivered.

Introduction of class 385s on the Edinburgh - Shotts - Glasgow Central line is expected in 2019, although timescales for this are dependent on electrification.