SIEMENS has announced plans for a new range of commuter and regional EMUs, known as Mireo. The articulated design uses many components used in the current Desiro City EMU for Britain and will supersede Siemens' Desiro ML platform for continental European markets. 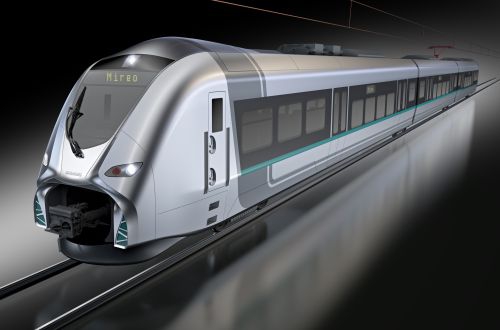 The Mireo employs a modular architecture with a limited range of core components such as traction equipment, which includes a newly-designed transformer and inside-frame bogies.

Siemens says Mireo will give operators almost complete flexibility to tailor the interior of the train to their specific requirements.

The Mireo design comprises 26m driving cars and 19m intermediate vehicles running on articulated bogies with an axle spacing of 2.65m. The train can be supplied in a variety of configurations ranging from a 52m-long two car train to 140m-long seven-car set. By increasing the number of powered axles, acceleration of up to 1.2m/s can be achieved. The Mireo will be capable of 160km/h, although Siemens will also offer a 140km/h variant.

Siemens has confirmed it does not intend to offer a diesel version of the Mireo although bi-mode options are under development which would use batteries for operation on non-electrified lines.

Siemens say the trains could be up to 30% more energy efficient than older multiple units due to its lightweight construction, intelligent energy management systems, and driver assistant systems.