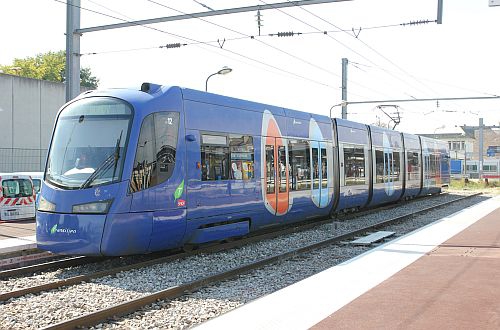 An SNCF T4 tram-train in Paris.

Mitsubishi Electric claims the traction transformer for the T4 tram-train is the world’s first application of a natural-running air-cooling traction transformer on the car roof. This should reduce noise by around 13dB by omitting the electric cooling fan, and reduce electricity losses by 50%.

Fully-hermetic constant-pressure bellows seals will eliminate the need to periodically replace the insulator oil, which remains in a sealed system so it will not deteriorate. As a result, overall maintenance costs should be reduced.

The traction transformers for the Z2N will be delivered in February and those for the T4 vehicles in December 2018. Once installed, the transformers will be evaluated for one year. If all goes well, SNCF will draw up mass-production specifications for both traction transformers, and Mitsubishi Electric hopes to win orders from tenders for both products. Mitsubishi Electric says it is the first Japanese company to be certified by SNCF as a propulsion systems supplier.