BRITSH train operator South West Trains (SWT) together with Siemens and leasing company Angel Trains have announced plans to equip all 45 SWT class 444 Desiro five-car emus with Wi-Fi and also forward facing CCTV in drivers cabs in a £3.2 million project to be completed in the next year. 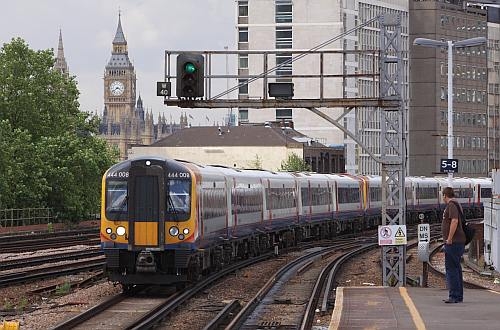 In addition, the class 444s and all of SWT's 127 class 450 trains will also be equipped with automatic selective door opening and coupler heating systems developed in conjunction with coupler manufacturer Dellner. All the class 444s have already been fitted with the coupler heaters and the remaining class 450 trains will be equipped before this winter.

SWT has witnessed annual ridership growth of 2.5% in recent years, despite Britain's double-dip recession, and expects to use its existing trains more intensively, while also supplementing the fleet with former Gatwick Express class 460s and class 456s from neighbouring operator Southern.

As part of ongoing investment to improve fleet reliability and reduce track wear, all class 444 wheelsets are now equipped with variable stiffness bushes developed by Freudenberg Schwab, Germany. The bushes are designed using internal fluid reservoirs to reduce stiffness at lower speeds (when most track damage was occurring) and increase stiffness at higher speeds to maintain passenger comfort.

Work to install the variable stiffness bushes on the class 450 fleet will begin in September after the London Olympic and Paralympic games. Infrastructure manager Network Rail has part-funded the wheelset modification programme.

The entire SWT Desiro fleet is now fitted with regenerative braking following an 18-month programme to equip the trains and a 5% net reduction energy usage has been achieved, although the amount of energy returned to the grid via the third rail is greater in busier urban areas.