SPAIN’s development minister Mr Iñigo de la Serna and minister of energy, tourism and digitalisation Mr Álvaro Nadal visited Asturias on January 8 to officially launch trials of what is claimed to be the first main line passenger train in Europe to be powered by liquefied natural gas (LNG). 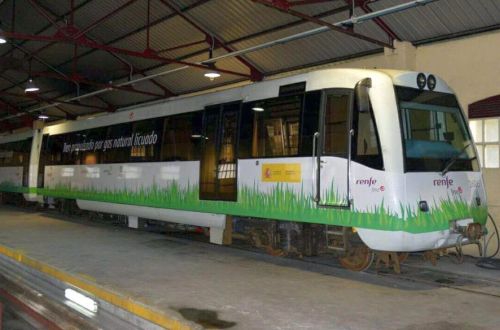 The project, which is a joint venture between train operator Renfe, and Gas Natural Fenosa and Enagás, is being implemented within the framework of Spain’s 2014-2020 strategy for developing vehicles with alternative energy (VEA) and is also part of Renfe’s drive to explore the use of alternative fuels.

The project involved removing one of the two diesel engines in a Feve class 2600 two-car metre-gauge DMU and fitting an LNG engine.

The train is undergoing trials on the Baiña - Figaredo section of Renfe-Feve’s Baiña - Collanzo line, which will enable researchers to compare the performance of diesel and LNG traction, and identify the technical requirements for LNG operation.