STADLER confirmed on June 26 that production of aluminium carbodies will begin shortly for the fleet of class 777 EMUs for Liverpool’s Merseyrail suburban network. 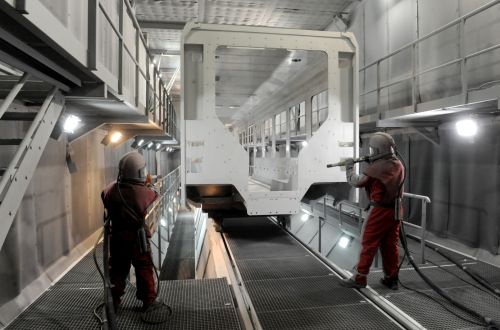 Stadler was awarded a contract by Merseytravel in February 2017 to supply and maintain 52 articulated four-car trains to replace Merseyrail’s fleet of 59 class 507/508 EMUs, which date from 1978-1980.

Stadler says the second stage of the three-part design process for the 750V dc third-rail trains has been completed at its facility in Valencia, Spain. All three phases are subject to approval by the customer.

Stadler says the first batch of raw material for carbody production has been delivered to its plant in Szolnok, Hungary, with metal cutting set to begin soon. All onboard systems have also been ordered.

Over the next few months the bodyshells will be machined, welded, sandblasted and treated with an anti-corrosive coating before painting. Around half of the carbodies will then be transported to Stadler’s Altenrhein facility in Switzerland, with the remainder going to Siedlce in Poland.

Stadler says the first carbody will be completed in September and type-testing of the first train will start on the Merseyrail network in mid-2019. Most of the fleet will be in service by 2020.

The trains will be maintained at a purpose-built depot at Kirkdale, which is currently under construction.