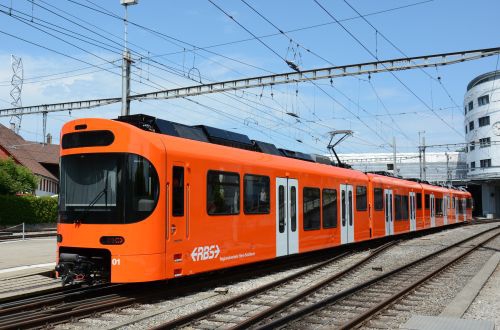 The 60m-long train, dubbed ‘Worbla’ by RBS, was unloaded from a standard-gauge wagon and moved from the station to the depot under its own power.

Authorisation of the trains for commercial operation is expected to take around four months. The first train will enter service at the end of the year, with full fleet deployment scheduled for 2020, enabling the withdrawal of RBS’ ageing ‘Mandarinli’ EMUs.

RBS ordered the fleet from Stadler in May 2016 in a deal worth SFr 134m ($US 135m) and the trains are being assembled at Stadler’s Bussnang plant. The air-conditioned trains will be deployed on Bern S-Bahn Line S7 services, which link the Swiss capital with Worb.

The first train will be officially named ‘Worbla’ in a ceremony at Worb station on August 18.

One of the trains will also be on show at InnoTrans next month.